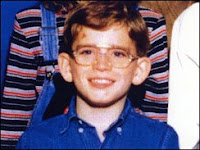 ULB told me about this case. It involves an adoptee, Adam Herrman, who has been missing since 1999. Forget the Caylee Anthony story! This case went unreported for ten years. This little boy was adopted by a Kansas couple, Doug and Valerie Herrman, when he was two out of the foster care system. Remember this story about the adoptive mother that was beating her daughter? The girl had to escape out of the window in order to stop the beatings. Her sisters were in the family freezer. This story is probably similar to it but there is no body nor little boy. The boy has been missing for years. Ten years to be exact. The adoptive parents did not report it because they were having too many issues with him and just did not want to deal with it anymore. They were still however claiming him on their taxes and their bankruptcy forms. They were also still collecting federal adoption subsidies in the form of Medicaid. So they just remained mum on his whereabouts. Did they receive money for this child? One really wonders. Of course once the adoption is final there is no going back and checking on the child just like the previously mentioned case with the three girls. I think the Russians have it right in the sense that they are required to do follow ups for several years. This is the kind of program that should be implemented here in the United States with foster to adopt, domestic and international adoptions finalized here.

These adoptive parents have stated that he kept running away and that he was homeschooled. They got tired of dealing with it. I wonder if there is proof of that in the way of police reports. One of his adoptive brothers came forward. He stated that these adoptive parents were abusing him and his brother, Adam. He even called the police but told them when they arrived that he lied. Other relatives have reported him being chained to a bathtub faucet. Nice really nice.

Detectives in this case hopes that this gets national attention so that someone anyone can find this young man. Adam is now 21 years of age. The news will be putting an age enhanced photo soon. Some of the main stream media has finally began reporting on it.

If you have seen a young man who looks similar, please report it as quickly as possible. I may rag on the parents who put their Russian adoptees in that Montana ranch but at least they are being cared for by someone. Someone knows where they are at. It is unexcuseable for adoptive parents to not report that their son is missing. So much for adoption being similar to the real thing.
Posted by Amyadoptee at 6:11 PM

Thanks for spreading the word about him.

This terrible story does not reflect every adoptive family. There are plenty of loving adoptive homes who are happy. I'm sorry you've had a bad adoption experience and I'll pray that you gain peace on this issue. Best wishes, Tiffany

People like this should be held accountable. I see by your website that you are looking to adopt. If you have this kind of attitude, you will not be a good adoptive parent let alone a good parent. I think you need to start researching adoptees and how they feel about adoption before you make adoption completely about your needs. I will pray for your enlightenment so that you do not have a pissed off adoptee because that is exactly where you are headed.

I'm sorry you've had a bad adoption experience and I'll pray that you gain peace on this issue. Best wishes, Tiffany


What a condesending bitch.