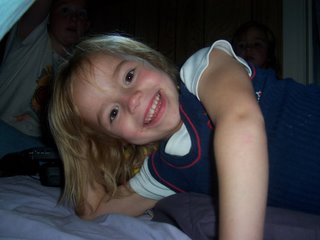 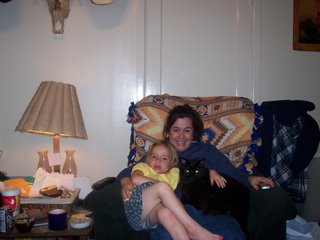 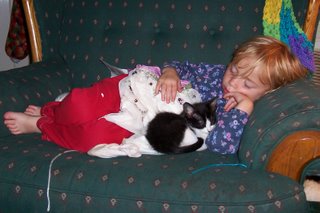 The top left is of me, Cheyenne, and Smokie. The top right is Cheyenne. The middle left is Cheyenne with Goober, one of our many kittens. Since Dakota and her dad got to have her pictures on a previous post. I figure everyone would want pictures of me and my youngest angel.

The next birthmother story is completely anonymous. I am protecting all involved in this story. I am even using false initials. This woman is a pillar of strength in my mind. Some of the words that she used tells me that she has a support group. I hope it is Concerned United Birthparents. Maybe one of these days she will delurk and present herself to me.

A few years ago B explored opeing her husband's adoption records. She found out a great deal through family members. Even found her husband's birthfather's sister. She also found out that he died. This sister also stated that O, the husband, looked like the birthfather. She had been given various names on the birthmother. None of them even matched. Since I began my search, she restarted his search. I had also found out that Texas law had changed. I mentioned this to her. She talked to her husband again about searching. He agreed because they needed medical information. They have a son that may be having problems with autism. She called the courthouse. She was told that she needed a signed letter from her husband and a five dollar fee. The judge would then read over the information and decide whether or not to approve it. She took the letter and fee to the courthouse. The judge approved it. I assume that the records were copied and released to B. She now had the birthmother's name, J. She began a search and found her. B had her sister call because B was just too scared. J initially refused. B called her some time later. J decided that she couldn't meet just yet. She needed some time because she had some pressing personal issues that could not wait. She said that she would call sometime around the beginning of summer. She took B's number.

A few weeks ago J called B. B was sick as a dog that day. She was worried about giving it to her. J was coming into town and wanted to meet. "Could B meet her later on in the day. She would be getting a hotel and wanted to meet there. She had told B that she needed to get away. B was freaking out at that point. What would make her want to get away? Fortunately J told her that she was going to end up talking like a goat if she didn't get away for a day or two. Evidently they raise goats. I think B must have laughed at that one considering that my husband and I have been on two goat ranches. B also knew better than to say no from my experience alone. I told her that it was an opportunity of a lifetime. B didn't want to meet at a hotel. So they decided on a Denny's restaurant up the road. They would meet each other at 7:30. I must have called B several times that night. I was so excited for her and her husband. B finally called me the next morning. They realized that B's twin daughters got their heighth from her grandmother. O had her eyes, nose and mouth. B said that J was a beautiful woman. B also thanked her for the blessing of her son. They exchanged photos. They commented on all of them. They also decided to be friends.

Her story is a sad and heart breaking one. I have to commend her for stepping forward and sharing with B. She was married to an abusive man. When he went to Vietnam, she met O's birthfather. They fell in love. B had been told by his sister that he love her passionately. J didn't believe it because he had told her that he was seeing other women. She said that she didn't care. All that she understood was that she loved him. She became pregnant. She also had other children with her husband. She knew that she would have to leave them with family to take care of her situation. She left with the birthfather. She ended up coming back to Texas some time later. She knew that if her husband found out, he could and would very possibly kill her and her son. She felt fear for her son. She felt it necessary to protect him. She put him up for adoption. She also wanted to hold him. She fought for the right to do that. It still came down to saving his life. Such a sad and beautiful story. Choosing to put a child up for adoption is a very difficult one but it was the best for all involved at that time. She finally divorced that man. I have a feeling that she always wondered about him.

At the end of the conversation, she requested to meet her son. B would tell him. She tried so hard to convince him. He refused. All he wanted was medical information. He actually got mad about it. J did state that she would only do it if he was ready. I guess B told her that he wasn't ready yet. I hope in time that I get to meet this woman. I also hope to show O that it is alright to open himself to her. It is not the betrayal of anyone. It is his birthright. Maybe with time, a curiosity will develop. Hehehe I will do my best to encourage it.
Posted by Amyadoptee at 5:18 PM

How can I email you without having to put my email on here?
MSP

it's just horrendous what first moms have to endure. and i wonder what it is that makes adoptees refuse to want to meet theirs. i know i would have given anything to meet mine.

I honestly believe he thinks he is being disloyal to his afamily. He also states not being interested in finding her.

Well, to be the devil's advocate here...

Search and reunion is usually the only part of the process that an adoptee has any choice or say in whatsoever.

His wife took it right out of his hands, and frankly, I don't blame him for being furious with her.

No one can make the journey for us.

Even though she had the best intentions, she stole that journey from him.

I agreed but I have to say this much. They both wanted the medical information since their son has possible autism issues. We are not sure about it yet.