ARE WE JUST A BIT ENTITLED HERE?

Here is the story. I hope you can see why I was so angry over it. Prospective adoptive parents, if you read, look at yourselves objectively. If you see this in yourself, please change. I have no intention of reading this book either because of this article.

The Agonies of Infertility, the Thrills of Adoption

For Santa Barbara-based author Brooks Hansen and his wife Elizabeth, the road to parenthood was perplexing and perilous, fraught with physical and emotional pain, tormenting personal introspection, and more medical failures and bureaucratic nightmares than any sheer mortal should be expected to endure. Yet their story, as relayed in the esteemed novelist’s first memoir, The Brotherhood of Joseph, is frighteningly typical for couples who spend years waging against infertility before—or while simultaneously—embarking on the equally challenging path toward adoption.

“You can’t look at a negative pregnancy test and say, ‘We’re one step closer,’” explained Hansen the other day over iced espresso at Our Daily Bread, around the corner from his home on Garden Street. “You’re not. You’re just older, way poorer, and you’ve got to decide whether you want to try again. There’s no silver lining while it’s not working.” And not working for the Hansens included nearly $100,000 and seven years of attempts at conception, employing every reproductive acronym in the book (IVF to DCG to FSH), twice-daily injections for Elizabeth, and a steady string of doctor consultations. 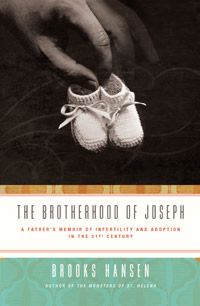 Unaided by the best of 21st-century reproductive technology, the Hansens finally began investigating adoption—but their delay in doing so wasn’t motivated by worries about not passing along their genes. “We were just looking for the thing that was going to work,” explained Hansen, who has roots in Carpinteria. “Our great frustration was the continuing of the failure.” And adoption, said Hansen, isn’t all that much easier or surefire than fighting infertility. “You can’t act like adoption is easy,” he explained. “‘Just adopt’ should not be an allowable phrase in English.”

From their former home in New York City, where Brooks had spent most of his life, the Hansens researched adopting a child in the United States, but found state laws to be too protective of the birth mother for their taste, in some cases allowing the child to be retrieved even six months into the adoption. Plus, almost all states preferred open adoptions, whereby the connection between birth mother and child is kept open. Though Hansen said that arrangement was “completely cool for couples who are comfortable with it,” he and Elizabeth, a longtime teacher who now works as an administrator at Marymount School, were not.

That led them to the shell game of international adoption, where countries open and shut the legal doors on a whim and the expected pitfalls—bribery, unexpected delays, arbitrary decisions—are all part of the bargain. After considering Korea, Romania, and beyond, the Hansens eventually settled on Russia and wound up in the quaint Siberian town of Tomsk, facing the toughest decisions of their lives.

All this and more is intimately laid out in Hansen’s 242-page book, a deeply personal and often heart-wrenching saga of parental desire and societal shame written, for once, from the perspective of a man. “I’d bet that there are whole wings of libraries for adoption books by women,” said Hansen, “but there is not a whole lot from the male point of view.”

Despite its niche and a fast-moving, compelling story, the book was still a hard sell for Hansen, whose four novels (Chess Garden, Perlman’s Ordeal, The Monsters of St. Helena, and Boone) and children’s book (Caesar’s Antlers) have garnered considerable acclaim. He’d all but given up on the Brotherhood manuscript until an editor who liked it early on was able to publish it under the new Rodale imprint, Modern Times. The book was released in early June, and is currently getting a lot of attention on satellite radio shows. Hansen hopes to expand his fan base in Santa Barbara, where he’s lived since last July, with a signing at Chaucer’s Books on July 6.

But the Brooks Hansen you’ll meet at Chaucer’s appears to be a world apart from the agonized man in the memoir. Today, Hansen and his wife are the proud parents of two adopted children, four-year-old Theo, who you meet in the book, and two-and-a-half-year-old Ada, who they later adopted from Kazakhstan. (Lest you think this spoils the tale, Hansen’s author’s bio on the book jacket mentions the two children, too.) This summer, the happy family is moving to Carpinteria, where Hansen’s mother grew up and where he spent many of his summers. Carp is also where he met Elizabeth, who years ago came to babysit Hansen’s younger cousins when the older relatives left for a weekend trip to San Miguel Island, which was leased in the early 1900s for shepherding purposes by Hansen’s grandfather. The two later met as adults, and fell in love.

So how does Elizabeth like having their personal lives laid out for all to see? She approves, said Hansen, who explained that it wasn’t such a big deal to lay himself bare, in part because “there’s a ton of stuff that I didn’t put in there … it’s honest, but not probing.” And what about Theo? “I hope that if he does read it,” said Hansen, “he sees that it’s a story about how much of a miracle it was that we found him.” A miracle, you’ll find in reading the book, as magical and mysterious as any path to parenthood, biological or otherwise.

Brooks Hansen will sign copies of The Brotherhood of Joseph on Sunday, July 6, at Chaucer’s Books. For more information, see brookshansen.com

Posted by Amyadoptee at 9:12 AM