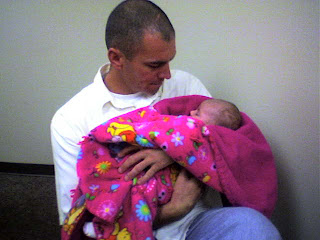 I have been blessed in recent weeks. I mean truly blessed. I got to meet Shawn McDonald this past weekend. I was lucky enough to have been given a photo of Shawn and Hunter. I have placed it upon my desk as motivation. I mentioned that he makes these most awesome floating staircases. He and his father are true artists. To create such a work of art is an awesome thing. To make something with your own hands and know that it is in some of the most beautiful homes in Texas is truly a site to see. I got to watch this young create this piece of art. I also got to hear the full story of his child's abduction. It is a sad story. If there is ever a young man who is a parent in mind, body and spirit, it is this man. He doesn't drink, smoke or even date. He hasn't in two years. His children are his main and sole concern. Men like that are few and far between.

I have been blessed in that I have spoken with another one. His name is Bryce Carkhuff. He is currently fighting a set of adoption attorneys in Oregon. Many have read his story as I have posted it here. Bryce has done his share of bad things in the past. He has long since cleaned up his act. He is another whose sole concern is his daughter, Autumn Faith. Faith is because this young man has a deep abiding faith in the Lord. He believes that the Lord will stop this injustice of his daughter's abduction. Bryce is quickly learning the ropes of this thing called adoption. I am in the process of finding court cases that support his side. I am making sure he has the ammunition to fight the powers that be in adoption. He is a good kind hard working young man fighting for his right to raise his daughter. This man also deserves the opportunity to do so.

Hmmm where in Oregon? Does he need support in court? A friend to be there? I am in Oregon

Hey Laurie, can you email me at amyburt40@yahoo.com. I can give you my number and his number as well. He is a really good guy. He is catching on real quick. He could use our help. He is an honorable young man.

Ok I talked with him, I plan to show on Monday. Thanks for connecting us.
Laurie

Any update on Bryce and his daughter? Thanks in advance.

Hi, I would like an update also, if there is one. I just saw the Dr. Phil show today. I live in Australia but am from the states.
Thanks!